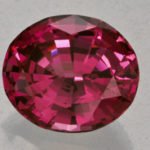 Garnets are a set of closely related minerals that form a group, resulting in gemstones in almost every color. There are more than twenty garnet categories, or species, but only five are considered gems: pyrope, almandine, spessartine, grossular and andradite.

Red garnet is one of the most common and widespread of gems, found in metamorphic rocks – rocks altered by heat & pressure – on every continent. Not all garnets are as abundant as the reds. Demantoid, for example, is a rare and famous green garnet, spessartine (also called spessarite) is orange, and rhodolite is a beautiful purple-red. Garnets can even exhibit a color-change phenomenon! 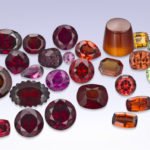 Group of garnets showing the broad color range in the species and varieties.

Garnets maintained their popularity through the Ages and were extensively used for Bohemian jewelry in the 18th and 19th centuries. Garnets were very fashionable in Victorian times as well.

Of course with a variety of colors available, garnets are still popular today.  They can be used alone, or in combination with other stones – see some great garnet pieces below!

Florabella Earrings with 36 Garnets, among other stones