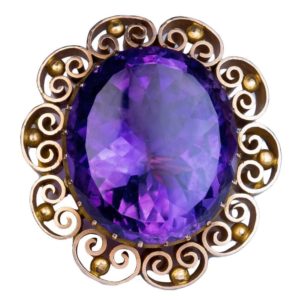 Amethysts are a type of quartz, with purple coloring that runs the gamut from reddish purple to a bluish lilac. The hardness of the mineral is the same as quartz, (7 on the Moh’s Hardness Scale) thus it is suitable for use in jewelry. Amethyst is known around the world for its striking beauty, deep color and minimum inclusion. The ideal grade is called “Deep Siberian” and has a primary purple hue of around 75–80%, with 15–20% blue and (depending on the light source) red secondary hues. Amethysts are often found in geodes amidst cooled lava. 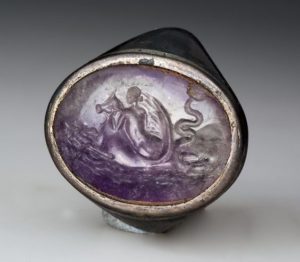 Amethyst was used as a gemstone by the ancient Egyptians and was largely employed in antiquity for intaglio engraved gems. An engraved gem is a small gemstone, usually semi-precious, that has been carved with images or inscriptions. The engraving of gemstones was a major luxury art form in the ancient world, and an important one in some later periods. 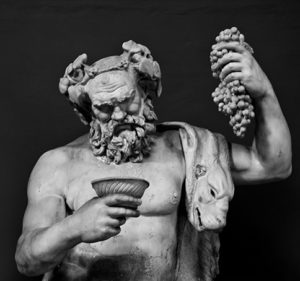 In Greek mythology, a beautiful maiden called Amethystos was known to have rebuffed Dionysus, the god of wine. The legend says that the maiden prayed to the Gods to keep her chaste, resulting in her transformation to a white stone from a maiden. Dionysus, driven by grief, is said to have poured wine on the stone, turning it purple. As a result, the Amethyst is often associated with romance, lust and love.

In fact, the Amethyst gets its name from the Ancient Greeks.  It is derived from ‘methustos’, meaning intoxicated. The stone was believed to protect its wearer from intoxication. The Greeks and Romans wore amethyst on their person and created drinking vessels from the stone to prevent inebriation and intoxication.

In the Middle Ages, it was considered a symbol of royalty and used to decorate English regalia.  Medieval European soldiers wore amethyst amulets as protection in battle, believing that amethysts heal people and keep them cool-headed.  Beads of amethyst have been found in Anglo-Saxon graves in England.

Until the early eighteenth century, the amethyst was accorded a regal status. The amethyst was believed to be a part of the cardinal gemstones, in the same league as the Diamond, Ruby, Emerald and Sapphire. Due to the discovery of extensive deposits of amethyst in Brazil, the stone is no longer considered as precious. The best varieties of the Amethyst gemstone are found in Siberia, Brazil, Sri Lanka, The United States and the Far East.  Collectors look for depth of color, possibly with red flashes if cut conventionally. As amethyst is readily available in large structures the value of the gem is not primarily defined by carat weight; this is different to most gemstones where the carat weight exponentially increases the value of the stone. The biggest factor in the value of amethyst is the color displayed. 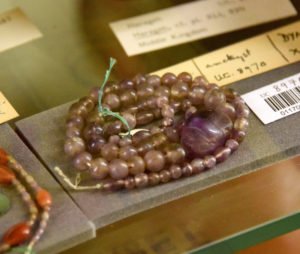 Amethyst is believed to bring the wearer emotional stability and inner strength.  It is said to enhance flexibility and cooperation.  Some say that wearing an amethyst will give you courage and help to prevent insomnia.  The February birthstone is thought to soothe irritability, and balance mood swings, alleviate sadness and grief, and purify spaces of negative vibrations.

Garnet: The Most Ancient Talisman