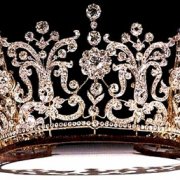 As a symbol of social status and power, men and women have adorned their heads with various kinds of crowns and tiaras dating back to Egyptian times.

Ancient Egyptian pharaohs favored gold head-bands.  The bands were sometimes decorated, with tassels hanging over the forehead or down the temple.  In the tomb of Tutankhamun, King of Egypt, it was discovered that the king’s mummy was wearing one such headdress, a gold diadem circle.  At the front was a detachable gold ornament with the head of a vulture and the body of a cobra, symbolizing the unification of Lower and Upper Egypt.

“Diadem” comes from the Ancient Greek, meaning “to bind around.” Their diadems were made from all kinds of metal.  At the time there was a limited gold supply, so their tiaras were decorated with embossed motifs, including the Heracles knot, a knot often found in Hellenistic jewelry. Once the gold supply opened up styles became less austere and diversified into intricate garlands of leaves and flowers.  Romans were next, and expanded on the fashion of the gold head-bands, adding precious stones to their designs. The first real diadem was attributed to a Roman Emperor, Gaius Valerius Diocletianus (C.E. 245-313). According to British history, “Diocletian’s head was encircled by a white fillet set with pearls as a badge of royalty.”

To decorate the head with flowers or leaves was an ancient custom and signified honor, love, or victory.  Greeks celebrated victory in games by crowning the champions with wreaths made from natural laurel leaves.  The tradition continued with the Romans, who honored generals with wreaths made of real gold, turning perishable natural foliage into an eternal symbol.  So Roman conquerors wore golden wreaths, and their Roman brides wore wreaths made from flowers and leaves.

Symbolism was  woven into the design of all of these wreaths and other headwear. The symbols played a part in religious customs, literature, and legends for all time.  For example, the bridal wreath was a symbol of purity.  Lilies symbolized purity; wheat, fertility; rosemary, male virility; these metaphors are still acknowledged by many brides centuries later. 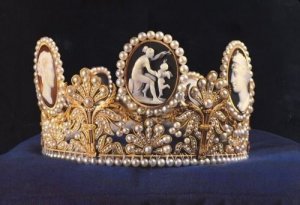 Napoleon had the famed Cameo tiara, worn by Swedish royal brides today, made for his wife. 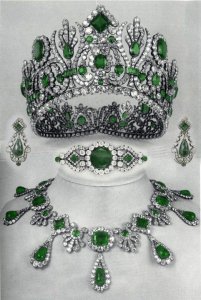 The Marie-Louise Diadem was literally the crown jewel of a full parure that included the diadem itself, comb, necklace and matching earrings.

The term tiara, in its original form, described a high-peaked head decoration that was worn by Persian kings.   Tiaras were not popular during medieval times, as fashion dictated that a woman’s head and hair should be covered.  Once the Renaissance relaxed those customs, a women’s hair was often worn in curls and waves around her face.  Hair was adorned with a variety of natural or jeweled decorations, some of which approached the look of a tiara, though they were still more casual.

During Napoleon’s reign, there was a rebirth of interest in the classical, and a revival of the ancient fashion for diadems.  Napoleon and his wife Josephine are often considered to have started the trend of luxurious headwear. In fact, Napoleon had the famed Cameo tiara, worn by Swedish royal brides today, made for his wife.

For his coronation in 1804, Napoleon wore a laurel wreath of golden leaves, each representing one of his victories. It was crafted by a Parisian goldsmith and was rumored to have cost 8,000 francs.  Napoleon’s Roman wreath of victory was imitated by the women of society, and a new fashion was born.  A new, swept-up hairstyle was the perfect style to wear with a high, flat tiara, pointed at the front, embossed in gold and decorated with jewels. Empress Josephine was painted on several occasions wearing different tiaras, also known as bandeaux.

Empress Marie-Louise, Napoleon’s second wife, received an even more elaborate tiara to mark the birth of their only son.  It was encrusted with diamonds, surrounding large crown-jewel diamonds and emeralds. 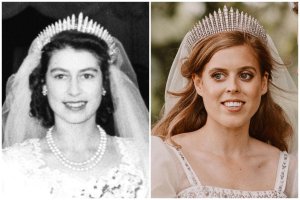 English royalty embraced this tradition, expanding tiaras and crowns to include gemstones in addition to the diamonds.  It was in the 19th century that tiaras first became important wedding symbols for the British royal family. Queen Victoria began a collection of priceless tiaras that still belongs to the family today.  There are a number of famed royal tiaras such as the Queen Mary Fringe Tiara worn by Queen Elizabeth on her 1947 wedding day, and the Diamond Bandeau Tiara, worn by Megan Markle on her wedding day in 2018.

That tradition continues today, with many brides wear a tiara on their wedding day.  Perhaps it is simply a trend, or just maybe it is symbolic of more – Every bride dreams of feeling like a princess in her wedding dress, so the tiara is the perfect accent to complete that dream!

A Token of Life and Eternal Love