Neptune and Uranus are two of the most mysterious places in our solar system.  We only met Uranus in 1986, when Voyager 2 spent 5 hours exploring the planet.  During that exploration we found eleven new moons, and learned interesting things about the planet’s atmosphere: it was extremely cold, with a composition primarily of hydrogen and helium.  Neptune has an atmosphere similar to Uranus.  Both atmospheres are dominated by ices, in fact the planets are known as “Ice Giants”. 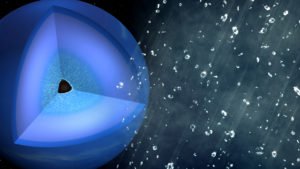 Now, Stanford University researchers have discovered that the depths of these “ice giants” are perfect for the formation of diamonds.  While they long suspected that the large amounts of hydrogen, helium, and methane (which give the outer planets their distinctive blue hue) found in the atmosphere are ideal for diamond formation, this is the first time that anyone has been able to recreate those situations in a lab setting.

How Can It Rain Diamonds? Don’t They Form Under Pressure?

Yes, but pressure takes many forms.  In this case, when storms roll through clouds of methane molecules surrounding the planets, lightning strikes cause carbon atoms to disassociate from their chemical bonds. Those atoms create “clouds” of soot which sink into the lower atmosphere.  The hot methane in the environment creates a high atmospheric pressure which squeezes the carbon into graphite and then again into diamond. Thanks to gravity, those diamonds could truly fall to the middle of the planet as “diamond rain.” 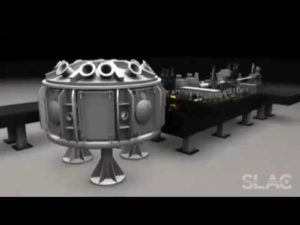 Using a tool called the Matter in Extreme Condition instrument, the scientists shocked a thin polystyrene sheet with a laser blast which heated the material. The heated polystyrene breaks apart into hydrogen and carbon atoms which then are compressed. For an incredibly short moment, this causes nano-diamonds to form.  Right now, most theories suggest that diamond would remain solid, at least inside the planets, but now that we can recreate the atmospheric conditions, we may learn otherwise.  If the temperature inside the planet is high enough, it could result in it oceans of liquid carbon with gigantic diamond icebergs.

It’s actually very difficult to test what’s being created in real time with the laser pulse, so ultrabright X-rays are being used. Similar to an incredibly bright and extremely short camera flash.  Currently scientists can only reproduce this exotic state for about a nanosecond at a time, and need the X-rays to explore the “atmosphere” they have created quickly.  Then, using simple X-ray diffraction (the method used to identify crystal structure) they found a surprisingly clear diamond structure.

We already knew that Saturn and Jupiter’s environments were favorable for diamond creation.  But our little group of eight planets are not the only place that researchers believe conditions are right for diamond creation.  The extremely hot planet (like 2315 degrees Celsius hot) Wasp-12b has such a high carbon-to-oxygen ratio that scientists believe the planet’s surface might be littered with diamonds. The lead researcher specifies: “You might see land masses and mountains made up of diamonds.” 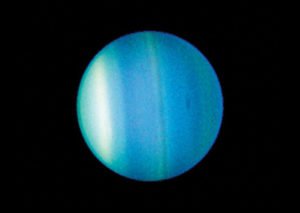 And what about adding diamonds to the atmosphere?  Harvard researchers have explored the idea of using diamond dust to cool the planet, and reverse some of the effects of global warming. Mimicking the cooling effects of a volcanic eruption, putting nanometer sized particles of diamond into the atmosphere would create a haze that blocks the sun’s rays.

A Proposal Carved In Stone

“Man”engagement Rings – Are They A Thing Now?
Scroll to top