Given the rarity and value of diamonds, it’s not surprising that some would seek ways to replicate their beauty. In recent years, laboratory-grown or synthetic diamonds have become more common, more advanced, and harder to detect. 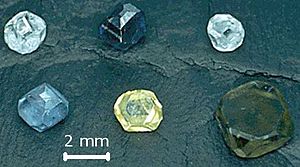 What is a Synthetic Diamond?

A synthetic diamond is the result of a technological process, as opposed to the geological process that creates natural diamonds. Synthetic diamonds have essentially the same chemical composition, crystal structure, optical, and physical properties of diamonds found in nature.  Most synthetic diamonds are categorized as either high-pressure, high-temperature (HPHT) or chemical vapor deposition (CVD) diamonds, depending on the method of their production. Since HPHT and CVD diamonds are virtually identical to natural diamonds, differences only become clear when they are analyzed in a gem laboratory. 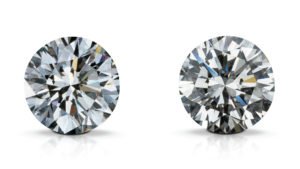 A synthetic diamond (left) and a natural diamond (right) can appear identical to the naked eye.

Both HPHT & CVD diamonds can be cut into gems and various colors can be produced: clear white, yellow, brown, blue, green and orange. The appearance of synthetic gems on the market created major concerns in the diamond trading business, because of which special spectroscopic devices & techniques have been developed to distinguish synthetic and natural diamonds.

When Were They Created?

Many attempts were made to convert various cheap forms of carbon into diamond. The earliest successes were reported by James Ballantyne Hannay in 1879 and by Ferdinand Frédéric Henri Moissan in 1893. Many other scientists tried to replicate their experiments. The most definitive replication attempts were performed by Sir Charles Algernon Parsons.

In the 1940s, systematic research began in the United States, Sweden and the Soviet Union to grow diamonds using CVD and HPHT processes. The first reproducible synthesis was reported around 1953. Those two processes still dominate the production of synthetic diamond. 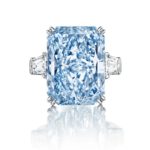 The largest diamond so far found in the universe is the size of a small planet and located 50 light-years away in the constellation Centaurus. Astronomers with the Harvard-Smithsonian Center for Astrophysics discovered the gigantic stone a few years ago, and they believe the 2,500-mile-wide diamond once served as the heart of a star. The largest mined diamond, called the Cullinan diamond, was more than 3,000 carats—about 1.3 pounds—before being cut.  In May 2015, a record was set for an HPHT colorless diamond at 10.02 carats. The faceted jewel was cut from a 32.2-carat stone that was grown within 300 hours.

Most industrial applications of synthetic diamond have long been associated with their hardness; this property makes diamond the ideal material for machine tools and cutting tools.  Diamond is an excellent heat conductor, and is widely used in electronics and optics as well.

Synthetic gem-quality diamond crystals were first produced in 1970 by GE, then reported in 1971. Although the GE stones and natural diamonds were chemically identical, their physical properties were not the same. The colorless stones produced strong fluorescence and phosphorescence under short-wavelength ultraviolet light, but were inert under long-wave UV. The first gem-quality stones were always yellow to brown in color because of contamination with nitrogen. Inclusions were common, especially “plate-like” ones from the nickel. 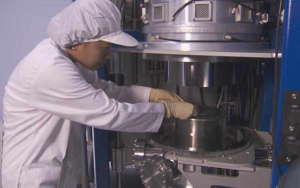 For growing gemstones, the most popular method is called chemical vapor deposition (CVD), which starts out with a tiny diamond “seed.” Each seed is made of a repeating lattice of carbon atoms — just like all diamonds. The seeds are placed inside a microwave plasma oven. The oven zaps natural gas into a plasma of carbon, which sticks to each seed and slowly builds up a diamond, atom by atom.

Starting a diamond lab isn’t particularly easy. A single machine can cost up to half a million dollars. Companies must also invest in materials and a highly skilled workforce that includes physicists and chemists. Still, the number of labs is growing.

Do Not Confuse Simulants With Synthetics! While the appearance of diamond simulants is similar to that of natural diamonds, they are not diamonds. Common diamond simulants include glass and cubic zirconia (CZ), both of which are completely unrelated to diamond at the atomic level.  Simulants are, of course, less expensive than the real thing.  They allow consumers to enjoy the flash and dazzle of diamond-like jewelry and to inexpensively complement the latest fashion trend.  But no matter how convincing the illusion, all diamond simulants have optical and physical characteristics that can be identified by a trained gemologist. 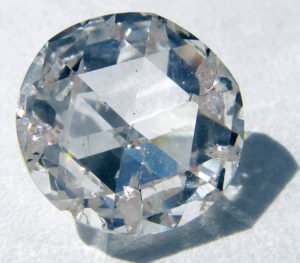 Synthetic diamonds for use as gemstones currently represent approximately 2% of the gem-quality diamond market. The percentage of jewelry-quality diamonds will grow as advances in technology allow for larger higher-quality synthetic production on a more economic scale.

Diamonds: A Smartphone’s Best Friend?
All About Fancy Colored Diamonds

The Sapphire Event!
Scroll to top