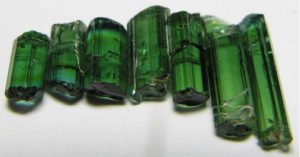 In the 1500s, a Spanish conquistador somewhere in Brazil confused green tourmaline crystal with emerald. That confusion lived on until scientists recognized tourmaline as a distinct mineral species in the 1800s. The confusion about the stone’s identity is reflected in its name – Tourmaline is derived from the Sinhalese toramalli, which means “mixed gems”. 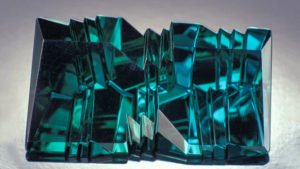 It’s easy to understand why people confuse tourmaline with other gems: the stone has a dazzling range of colors, from rich reds to pastel pinks and peach colors, intense emerald greens to vivid yellows and deep blues. People have probably used tourmaline as a gem for centuries, but they identified it as some other stone (ruby, sapphire, emerald, and so forth) based on its coloring.

In the late 1800s, tourmaline became known as in America as a result of the efforts of Tiffany gemologist George F. Kunz. He wrote about the tourmaline deposits of Maine and California, and praised the stones they produced. Tourmaline’s biggest market at the time was China. Much of the pink and red tourmaline from San Diego County in California was shipped to China because the Chinese Dowager Empress Tz’u Hsi was especially fond of the color. There, craftsmen carved the tourmaline into snuff bottles and other pieces to be set in jewelry. 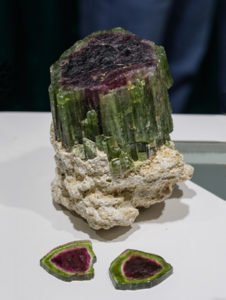 Tourmaline’s colors have many different causes. One of tourmaline’s most sought-after and generally available colors is the pink/red variety known in the trade as rubellite. Green tourmaline’s pastel hues are alternatives to the deep, rich hue of emerald and the softer green of peridot. At their best, green tourmalines are transparent, brilliant, and clean, with attractive bluish green hues. Stones that show attractive colors in both directions—such as bright green in one and blue in another—are the most valuable.

Since it was discovered in the late 1980s, Paraíba tourmaline’s striking neon blues and greens have electrified the gem world. The gem’s unique, vivid coloring instantly set it apart from other tourmalines. Paraíba tourmalines appear in a range of greenish blue, bluish green, green, blue, and violet hues. Because of the rough’s high value, Paraíba tourmalines are almost always custom cut. With Paraíba, however, color is the key factor, not size. So all other factors being equal, the gem with the better color is a better choice.

Cutters often fashion tourmalines as long rectangles. Making the cut parallel to the length of the rough crystal helps to reduce waste. But cutters also have to consider tourmaline’s optical properties – it can show different colors in different crystal directions. A crystal that appears pale green across its width can be very dark green—sometimes almost black—when you look down its length.

Tourmaline can be featured in many different types of custom jewelry, and is especially good for pieces with vibrant colors.  Contact us for a consultation today and see how tourmaline could work for you! 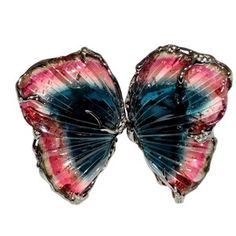