Opal is the birthstone for October, and Australia’s National Gem.  It’s the product of seasonal rains that drenched dry ground in regions such as Australia’s semi-desert “outback.” The showers soaked deep into ancient underground rock, carrying dissolved silica (a compound of silicon and oxygen) downward. 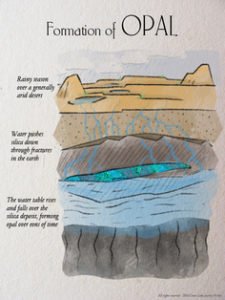 During dry periods, much of the water evaporated, leaving solid deposits of silica in the cracks and between the layers of underground sedimentary rock. Those silica deposits formed opal. So opal is actually a hardened gel, as opposed to a gemstone.

There are two broad classes of opal: precious and common. Precious opal displays a unique display of flashing rainbow colors called play-of-color, common opal does not.  That play-of-color occurs in precious opal because it’s made up of sub-microscopic spheres stacked in a grid-like pattern—think layers of Ping-Pong balls in a box. As lightwaves travel between the spheres, the waves bend, breaking up into the colors of the rainbow, called spectral colors. 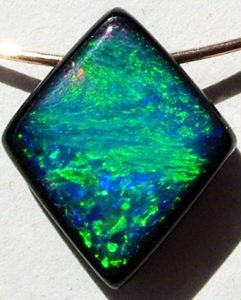 The colors we see when we look at the opal vary according to the (microscopic) size of those spheres. Approximately 0.1 micron (one ten-millionth of a meter) in diameter produces a violet color.  At 0.2 microns in size we see red. In between is the rest of the rainbow.

While there are many different colors of opal, the experts agree on five main categories:

Black opal can range from translucent to opaque, with play-of-color against a black or dark background.

Fire opal is transparent to translucent, but has brown, yellow, orange, or red body color.  Fire opal often doesn’t show any play-of-color.  It is also known as “Mexican opal.”

Boulder opal can range from translucent to opaque, with play-of-color against any background from light to dark. It’s known as boulder opal because fragments of the surrounding rocks or boulders are part of the finished gem.

Where Is Opal Mined?

A large percentage of the world’s opal comes from three distinctive regions in Australia, Lightning Ridge (the home of black opal) the South Australian fields of Coober Pedy, Mintabie, Lambina and Andamooka (the main sources of light base opal) and the Queensland fields, where boulder opal originates.

Solid opals can be found in Brazil, Mexico, Honduras as well as Peru and Tanzania Africa.  Ethiopian opals have been a recent find for opal lovers. The crystal opals from the Welo region are very popular due to their bright patterns. 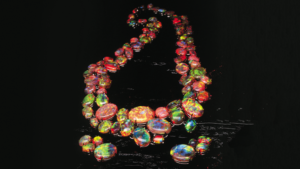 The Path of Enlightenment Necklace

Earlier this year, gem-quality common opal was discovered in Michoacán State in western central Mexico.  These opals were embedded in volcanic andesitic rocks. They were generally characterized by a medium to light orange to brown color, with no visible inclusions. While these new deposits are considered “common opal” since the material does not show play-of color, some gemologists may also consider the specimens to be fire opal due to the orangy bodycolor.

Another relatively new source for precious opal is located in Ethiopia’s Wollo Province.  It produces opals with vibrant play-of-color and interesting inclusions.

Next Up:  The magical and mysterious history of opal.

Trends to Watch This Fall

Tourmaline – The “Other” October Birthstone
Scroll to top