On August 17th, 130 million light years away, two dead stars collided in a constellation known as Hydra.  The collision, known as a kilonova, rattled the galaxy in which it happened and sent fireworks across the universe. It set off sensors in space and on Earth, and gave astronomers hopes of answering one of the long-sought mysteries of the universe.

Astronomers have long believed that these collisions were the source of many of the heavier elements in the universe, including precious metals like gold, silver and uranium.  Your wedding band, the Pharaoh’s treasures – they are the result of a collision between neutron stars – dense cores of stars that have exploded and died. These stars are masses as great as the sun packed into a region the size of Manhattan.  They are full of magnetic and gravitational fields, and collide at nearly the speed of light.

After studying the fireball from this recent explosion, astronomers have concluded that it had created a cloud of gold dust many times more massive than the Earth, lending proof to their belief that kilonovas are the source of our precious metals.

Numerous studies are ongoing and results are being published in many different fields of study.  Of the collision, David Reitze of the California Institute of Technology said “It’s the greatest fireworks show in the universe.” 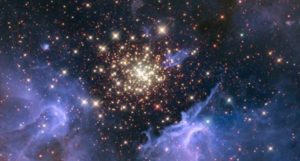 Daniel Holz, an astrophysicist at the University of Chicago said, “I can’t think of a similar situation in the field of science, where a single event provides so many staggering insights about our universe.”

David Shoemaker, a physicist at the Massachusetts Institute of Technology tells it as the story of a gold rush in the sky. It is estimated that an amount of gold equal to 40 to 100 times the mass of the Earth could have been produced over a few days and blown into space. In the coming eons, it could be incorporated into new stars and planets and in some far, far day become the material for a distant generation’s jewels, perhaps even that of another planet or life form. 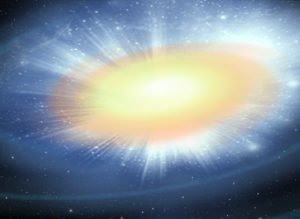 For more details about the kilonova, and the results of the subsequent studies, see the New York Times Article “LIGO Detects Fierce Collision of Neutron Stars for the First Time” by Dennis Overbye, October 16, 2017, and NPR article “A New Era For Astronomy Has Begun”, by Marcelo Gleiser.