Peridot jewelry dates back as far as the second millennium BC.

The word peridot comes from the Arabic “faridat,” which means “gem.” Most peridot formed deep inside the earth and was delivered to the surface by volcanoes.  The main source of peridot in the ancient world was Topazo Island (now Zabargad or St. John’s Island) in the Egyptian Red Sea. Ancient Egyptians called peridot the “gem of the sun,” believing it protected its wearer from terrors of the night. Egyptian priests believed that it harnessed the power of nature, and used goblets encrusted with it to commune with their nature gods. Peridot stones were also used for carved talismans.

Some historians believe that Cleopatra’s famed emerald collection may have actually been peridot. Through medieval times, people continued to confuse these two green gems. The 200-carat gems adorning one of the shrines in Germany’s Cologne Cathedral were long believed to be emeralds as well, but they are also peridots.

This gemstone saw a revival in the 1990s when new deposits were discovered in Pakistan, producing some of the finest peridots ever found. Some of these “Kashmir peridots” measured more than 100 carats. Today this gem is still prized for its restful yellowish green hues and long history.

Most of the peridot mined today comes from China, Pakistan, and Arizona and the gems that are found are mostly under 3 carats. Two of the finest peridot collections in the world can be found at the Field Museum in Chicago, and the Museum of Natural History in New York.

Peridot is the gem variety of the mineral olivine. Its chemical composition includes iron and magnesium, and iron is the cause of its attractive yellowish green colors.

The gem often occurs in volcanic rocks called basalts, which are rich in these two elements. Large strongly-colored, examples can be spectacular, and attractive smaller gems are available for jewelry at all price points.

The Four C’s of Peridot

COLOR: Although the best peridot is a pure grass green, most peridot is yellowish-green. The color range for peridot is narrow, from a brown-green color to yellowish green to pure green.
CLARITY: Most fine peridot is eye clean. Tiny black spots might be visible with magnification.
CUT: Peridot is cut in a wide variety of styles, including ovals, emerald cuts, and cushions.
CARAT WEIGHT: Large crystals of peridot have cut gems more than 50 carats in size. 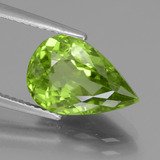 SEEING DOUBLE: Peridot has extremely high double refraction: when you look closely through the gem, you can see two of each pavilion facet.

EXTRATERRESTRIAL: Peridot crystals are found in meteorites: some rare extraterrestrial crystals are even big enough to facet as cut gemstones.