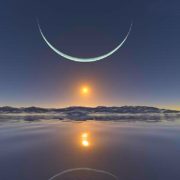 You are probably aware that on August 21, 2107, America will fall under the path of a total solar eclipse.  It will be one of the biggest astronomical events of the decade. 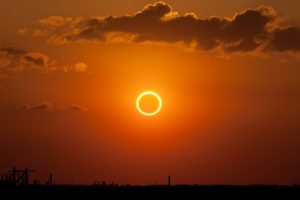 Ring of Fire During Annular Eclipse

An eclipse is the alignment of the Earth, the Moon, and the Sun. Around every 18 months or so, the Moon passes directly between the Earth and the Sun on its orbit around our planet. It’s a relatively rare occurrence because the Moon doesn’t orbit in the same plane as the Earth and Sun. But when the three bodies line up just right, the Moon covers up the disc of the Sun, and those in the direct path of the Moon’s shadow — called the path of totality — will see the Sun go dark. 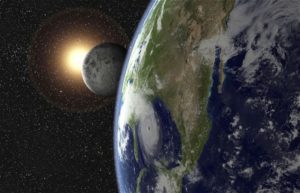 An eclipse occurs with perfect Earth, Sun and Moon alignment about every 18 months.

So What Does All This Have To Do With Diamonds?

Enter Baily’s Beads.  The Moon is not of course a level surface – it has mountains.  And valleys.  And when the last rays of sunshine before the darkness of the eclipse pass through those mountains and valleys, they form an effect known as Baily’s Beads, which resembles a string of blinding gems around the edge of the moon. 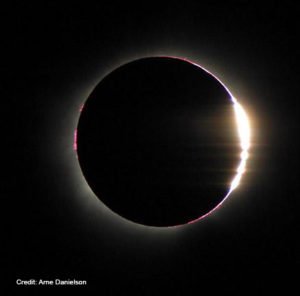 Baily’s Beads and the diamond ring happen because the lunar mountains are the first part of the moon to completely slide across the sun’s face. So as the moon moves between us and the sun, the mountaintops break the sliver of blazing sunshine into the string of dazzling beads. And as the moon continues to move, you’re eventually left with one last bead, the diamond. It’ll look as if it’s set on top of the corona, the sun’s white-hot crown of plasma. 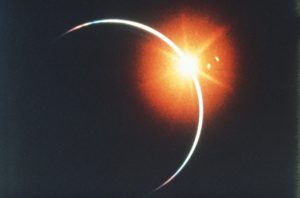 Francis Baily, an English astronomer, first noted this effect during the annular eclipse of 1836. According to Baily, during that eclipse the matching size between the moon and the sun was so close that it looked like beads of light, almost all the way around. He described it as a ring of beads that looked like a necklace.

When to See It

While the eclipse will take up to an hour, “all the real action is in the last minutes before the moon completely covers the sun, and in the first minutes when it begins to uncover the sun,” said  Rick Fienberg of the American Astronomical Society.  This entire phenomenon will last for less than a minute, so keep your eyes peeled.

And of course, you can be sure that at least one proposal will result.  In 2012, rumors of marriage proposals circulated the internet across Japan with this image.  “I proposed at exactly the right moment” was the rumor part. Romantic? Yes!  A real moment captured on film?  Highly unlikely. 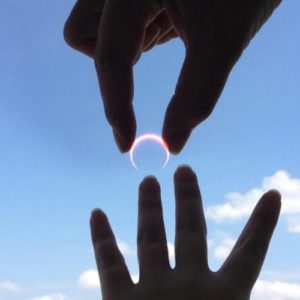 The image was later claimed by a viewer who reported that he used a popular app, Image Blender, to create the proposal scene.