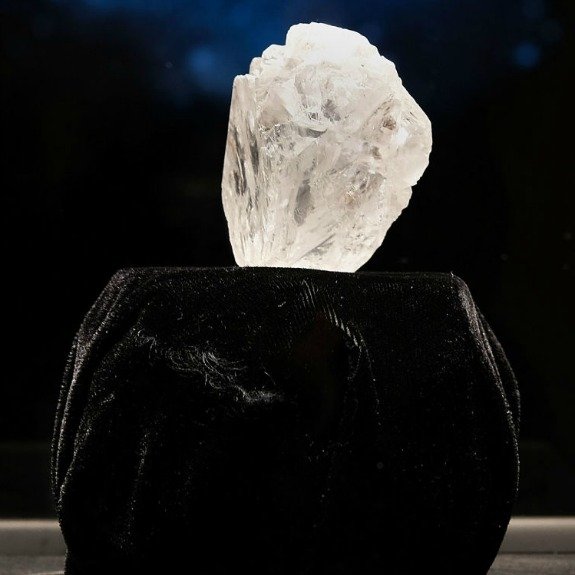 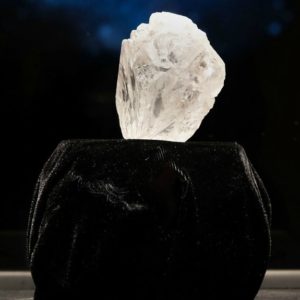 The Lesedi la Rona weighs 1,109 carats.  This massive tennis-ball sized rough diamond, the second largest ever unearthed, is expected to fetch $70 million at auction this summer.

Found by the Lucara Diamond Corporation in Botswana late last year, the stone has since been named Lesedi la Rona, which mean “our light” in Tswana, the language spoken in the area. It is thought that the stone could be cut to 400 carats.

“Nobody knows what a 400-carat diamond is worth,” Lucara’s Chief Executive Officer William Lamb said in an interview with Bloomberg News. “There’s blue-sky potential,” he said. “You only need two people that desperately want it, and then you’ll get a good price.”

Sotheby’s David Bennett, worldwide chairman of the auction house’s jewelry division, echoed how hard it is to predict what will happen to a diamond this scale at auction. “No rough even remotely of this scale has ever been offered before at public auction.”

The stone is second in size only to the Cullinan Diamond, which was found in South Africa in 1905 and weighed in at 3,106 carats. It was later cut into the Great Star of Africa Gem in the British Crown Jewels.

The Lesedi la Rona weighs 1,109 carats.  You’re probably looking for a stone that is just a bit smaller, so use the diamond search tool to find the perfect stone for your original design today.