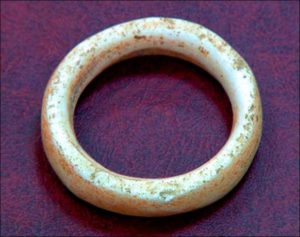 Back in Denisova cave, some 150 km (93 mi) south of the city of Barnaul, finds like a bracelet, a ring, and beads as well as the world’s oldest needle, were all made in layers of this underground complex identified as being occupied by Denisovans, after tiny fragments of these archaic humans were found and analysed.

Pictures shown here illustrate their remarkable Paleolithic handiwork from artifacts – for example a stunning green-hued chlorite bracelet, a marble ring, and beads from an ostrich eggshell necklace. Initially this jewelry was dated as being between 40,000 and 50,000 years old, with the latter currently the officially accepted figure.  Now, however, scientists from Russia, the UK and Australia are reexamining the dates of these objects amid suspicions that they are as old as 65,000 to 70,000 years.

At 50,000 years the know-how involved in these items – the bracelet has a hole made by drilling and rasping devices – are already breathtaking. Any older, and it challenges our entire understanding of the technological development of man. 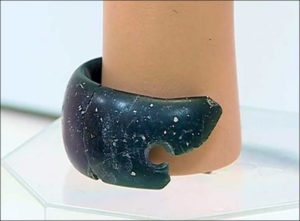 ‘The bracelet is stunning – in bright sunlight it reflects the sun rays, at night by the fire it casts a deep shade of green,’ said Professor Anatoly Derevyanko, former director of the Institute of Archeology and Ethnography, in Novosibirsk.  ‘It is unlikely it was used as an everyday jewelry piece. I believe this beautiful and very fragile bracelet was worn only for some exceptional moments,” he said.

The manufacturing technology used in the bracelet is seen as being more typical of a later period, for example the Neolithic era, which began around 12,000 years ago. His successor Professor Mikhail Shunkov has suggested that the long-extinct Denisovans were significantly more advanced than Homo sapiens and Neanderthals. 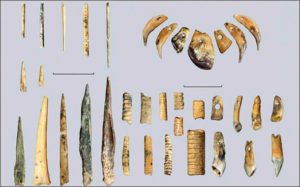 From: ‘Extinct Denisovans from Siberia made stunning jewellery – but did they also discover Australia? ’

Who says it has to be a diamond? Famous Sapphire Engagement Rings
Scroll to top