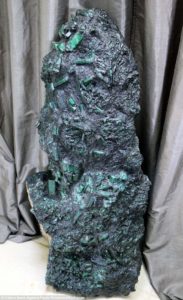 You may recall that Emeralds were our focus last month.  As the birthstone for the month of May, the gem was the featured stone on the website and the highlight of May’s Event here in the showroom.  Now, like many other jewelers, this month we turned our attention to Pearls, but it seems that the Emerald is not quite ready to give up the spotlight!

First was an emerald that made the headlines due to it’s massive size.  Recently it was announced that a giant emerald, measuring 4.3 feet and weighing a whopping 794 pounds,had been discovered in the north of Brazil. The precious stone was found 656 feet below the surface of the Carnaiba mine in the Pindobacu district, by the Bahia Mineral Cooperative.

The emerald is the second of its kind found in the region. The Bahia Emerald was discovered in 2001, and subsequently was transported to the United States illegally.  It became the subject of a legal dispute between Brazil and the United States, until it was decided in 2015 it would remain in the United States.

It was featured in an article in Wired Magazine earlier this year, “The Curse of the Bahia Emerald, a Giant Green Rock That Ruins Lives.”  Ownership has been claimed by at least 14 individuals as well as 2 countries.  The emerald has been tied to numerous lawsuits, blamed for bankruptcies, and linked to house fires and kidnappings.

Yesterday, another emerald made headlines.  The flawless Colombian emerald known as the “Rockefeller Emerald” sold at auction for more than $5.5 million. The rare, untreated emerald was originally purchased by John D. Rockefeller from Van Cleef & Arpels in 1930.  It was the centerpiece of a brooch purchased as a gift for his wife, Abby Aldrich Rockefeller.  After her death, Rockefeller had the brooch disassembled, and the emeralds were given to his children.  Son David had the largest of those emeralds mounted in a diamond and platinum ring.

The emerald is described as “exceptional, possessing an unusual combination of size, provenance, absence of treatment and quality factors” that make it rare and desirable.  Most emeralds require an oil treatment to enhance their brilliance and color, but this stone is untreated.

The emerald was the highlight of Christie’s ‘Magnificent Jewels’ sale on June 20th.  The buyer was Harry Winston, who immediately rechristened it the Rockefeller-Winston Emerald.

Next week, it’s back to the Pearl.  Unless some other gem steals the spotlight that is.

We also send periodic email announcements and a monthly newsletter with clips to our favorite News & Events stories.  Subscribe today.

Tourmaline – The “Other” October Birthstone 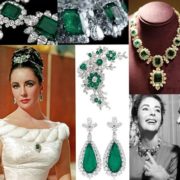 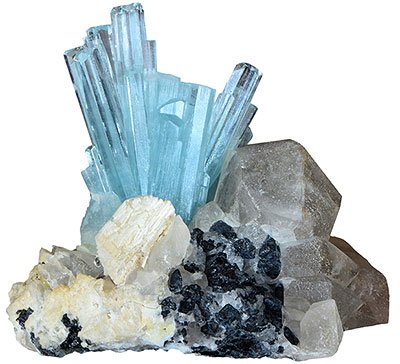 What Determines The Quality of A Pearl?
Scroll to top