The diversity and culture in NYC is one of the many reasons we are proud to call this vibrant city home. It was a day of romance in Times Square yesterday – proposals, weddings and vow renewal ceremonies.

Couples from around the world made promises and kicked off engagements during an all day-long event hosted by the Times Square Alliance. 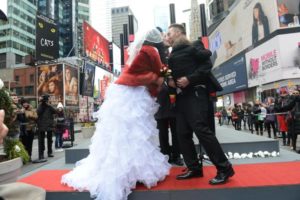 For some couples in the Tri-State area, Times Square plays a significant role in their relationship – It was the site of their first date perhaps.  As a result, many decided to brave the cold temperatures and say “I do” in front of friends, family and complete strangers.  Hotels in the area were also hard to come by – many couples traveled thousands of miles to celebrate Valentine’s Day in NYC, specifically in Times Square. Piertro Reyes traveled all the way from Chile to propose to his girlfriend Marcarena, and said the 5,200-mile trip was absolutely worth it. (She said yes!) 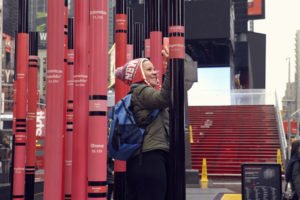 The Times Square piece is about much more than romance though.  This 9th Annual Valentine’s heart “champions the value of diversity in the city, and specifically the city’s immigrant populations, new and old, at a time when they are increasingly under siege,” according to the project description. 33 pink and red columns make up the work, each segment representing a different nationality of New York’s three million immigrants. If you face the artwork head on, the poles align, revealing the shape of a heart.  “We Were Strangers Once Too”, as the display is named, is meant to acknowledge and say thank you to the diverse communities of NYC for their many contributions historically, currently and into the future, according to the Times Square Alliance.  It will be on display in Times Square at Father Duffy Square, between 46th and 47th Streets, February 7–March 5, 2017.

Love was also in the air at the Empire State Building, where the 14 couples who won the 23rd annual Valentine’s Day Weddings Contest exchanged vows during ceremonies throughout the day.  The couples then celebrated with an overnight stay and other gifts.