Emerald is the bluish green to green variety of beryl, a mineral species that also includes aquamarine. They are the rarest of the colored gemstones and a much softer gem, making them more expensive and highly desirable. Emeralds are found in granite, pegmatites, and schists, as well as alluvial deposits. Some emeralds find their way into gravels where the action of the water tumbles and smooths them so they resemble shiny pebbles. 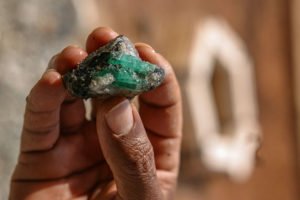 The first known emerald mines were in Egypt, dating from at least 330 BC into the 1700’s. Cleopatra was known to have a passion for emerald, and used it in her royal adornments. The Irani State Treasure contains an exquisite collection of Emeralds, as well as the Emerald tiara of ex-Empress Farah. 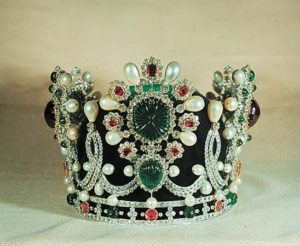 The Imperial Crown of Iran

Shah Jahan, one of the moguls of India that built the Taj Mahal, loved Emeralds so much that he had sacred texts inscribed into them and used these gemstones as talismans. The ancient writings of Veda, the sacred text of Hinduism, testifies to Emerald as being the “gem of good luck” and the “gem that improves one’s well-being”. These “Mogul Emeralds”, as they are known today, can be found in modern museums and collections. 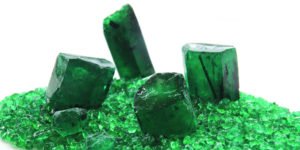 Emerald’s lush green is said to have “soothed souls and excited imaginations” since antiquity.  Rome’s Pliny the Elder described emerald in his Natural History, “…nothing greens greener”. He described the use of emerald, saying that they have found “no better method of restoring their eyes than by looking at the emerald, its soft, green color comforting and removing their weariness and lassitude.” Even today, the color green is known to relieve stress and eye strain.

Its vibrant green color reflects new spring growth, which makes it the perfect choice of a birthstone for the month of May. It’s also the gemstone for twentieth and thirty-fifth wedding anniversaries.

Diamonds in a Meteorite….

Some of The Queen’s Favorites!
Scroll to top