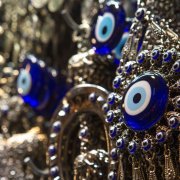 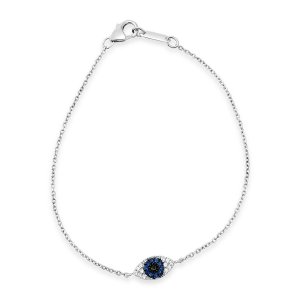 A universal symbol of protection, the evil eye is referred to as mati in Greek. It’s a particularly widespread belief in the Mediterranean region, as reflected by the abundance of amulets available to protect yourself from it. In Italy, where it’s called “malocchio”, the red cornicello is the most popular anti-Evil Eye charm. The earliest surviving evidence of this belief comes from ancient Mesopotamia (modern southeast Turkey/Syria/Iraq) in the form of incantations, eye-shaped amulets and references to the dangerous glance of the gods.  In ancient Egypt, the Eye of Horus, also known as a Wadjet pendant, was buried with pharaohs to protect them in the afterlife. 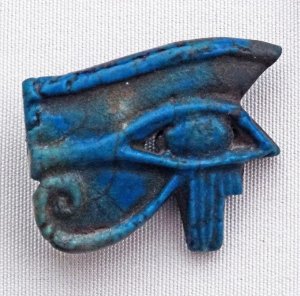 In Cyprus, Greece and Turkey, you’ll find the more traditional blue eye-like symbol on jewelry and decorations everywhere, endowed with the same protective powers.  Belief in the evil eye dates back to at least the 6th century B.C. when it appeared on Greek drinking vessels. It is referenced by Plato, Hesiod, Plutarch and many more classical authors. 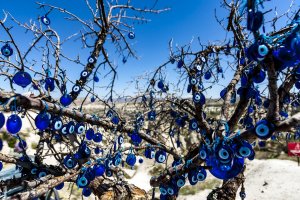 The “evil eye” we need protection from?  It is a folk concept that the hostile glance of certain people (or gods, or mythological creatures in some cultures) can result in injury, illness or even death. Usually, the victim is unaware, realizing only in hindsight that they “have received the Evil Eye”.  A talisman or amulet, designed in the shape of an eye, traditionally in the colors blue or green, is a sign of spiritual protection. These talismans come in different shapes and forms as pendants, bracelets, earrings and rings.  A “nazar” is the proper name for the typical eye-shaped Evil Eye amulet.

There was a time that the only sort of evil eye bracelet you could find came from the Flea Market or Street Fair, usually blue and white glass strung on leather chord.  Now they can be found with sapphires and diamonds, set in white gold, or in fine and vibrant enamel.

What do you think of this symbol of protection?  Do you have an Evil Eye? Will you start wearing one now that you know the history?

Check out this great sapphire and diamond Evil Eye Bracelet and make it yours today!

Credit:  Forte Academy, 5 things you should know about the “Evil Eye” (and how to protect yourself).; GIA.edu, Alamy

A Dog’s Appetite for Diamonds