Lightning Ridge is a town in north-western New South Wales, Australia, near the southern border of Queensland.  It is well known for its opals, especially Black Opals. 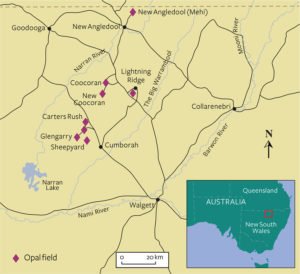 The name Harold Hodge is well known among the locals in Lightning Ridge.  Hodge moved to the area in the 1950’s with plans to open a motel. Instead of a motel, Harold fell in love with the Opal that was so prominent in the region.  Harold quickly become one of the toughest Opal buyers in town. Hodge invested in area businesses, employing locals and helping to strengthen the economy, because he was a great believer in the future for the town of Lightning Ridge.  And he did open that motel.  The Tram-O-Tel was popular for years in Lightning Ridge.

Harold was also the local bookmaker and slaughterhouse owner.  But it was not his business acumen that Harold is remembered for.  In Lightning Ridge he was known best for something else entirely – his unique and shocking Opal false teeth.  Harold so loved the black opal that he commissioned an oral surgeon to make him a custom set of dentures, where some of the traditional teeth were replaced with Black Opals.  Each Opal was hand picked by Harold.  This set of dentures rivals today’s more extreme dental accessories that feature gold, diamonds and other gems or precious metals typically seen in jewelry. It’s not uncommon today to see dentures and “grills” made from gold and diamonds.  The world’s most expensive dentures may be a set crafted by a dentist in Dubai.  The teeth are encrusted with 160 sparkling diamonds and are estimated to be worth $152,700.  Perhaps Harold was the origin of the trend! 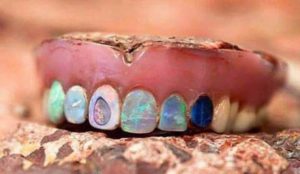 After years of smiling on demand and posing for photos with tourists, Harold had enough of being a tourist attraction.  He took out his teeth, and embedded them into the wall behind the corner booth at the local pub, Digger’s Rest, for everyone to see. Years after Harold passed away, his wife had the dentures chiseled out of the wall for a keepsake. Over the years notoriety about the dentures grew, and finally his teeth were donated to the Australian opal Center in Lightning Ridge, where you can view them today! 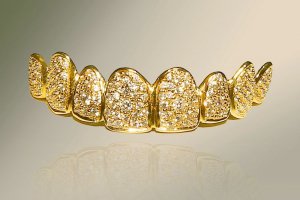 Lightning Ridge Black opal is one of the rarest gemstones on earth.  It has been described as a full rainbow of splendid colors.

What Is The Evil Eye?

You’re Invited! The Opal Event at the Grants Jewelry Showroom!
Scroll to top