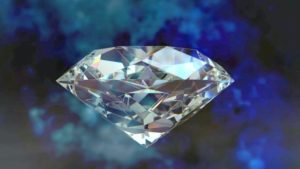 Diamonds are the traditional and modern April birthstones.  In their natural form, diamonds are the hardest substance on the planet, and they are believed to have been around for billions of years.

Diamonds are the rich cousins of graphite. Both are crystalline forms of pure carbon. The enormous differences in their properties are a result of the way the carbon atoms are bonded together. In graphite, carbon atoms are arranged in sheets that easily slide past each other, which makes graphite ideal as a lubricant and, of course, pencil lead. Diamond crystals, on the other hand, are a tight-fisted network of carbon atoms securely held in four directions.

There are many kinds of diamonds: transparent, translucent, or opaque; ranging from colorless to sooty black, with many colors in between. Mostly transparent diamonds, colorless or tinted, are used as jewelry. Others are used widely in industry. The color of a diamond depends on the kind of impurities embedded inside it. Yellow diamonds, for example, betray minute quantities of nitrogen, while boron imparts a bluish hue.

Diamonds are found in deposits of gravel swept by streams, rivers, glaciers, and ocean currents. They are also found where gravel deposits and organic material have been compressed into rock. Diamonds can be found in some samples of kimberlite – a type of volcanic rock first identified in Kimberley, South Africa. Tiny flecks of diamond have even been found inside meteorites – bits of rocky space debris that land on Earth.

Sanskrit texts dating from 400 B.C., talk about the extraordinary value and significance of diamonds. There was a major diamond trading business in Europe in the Medieval Era as well as during the Renaissance. Venice had a flourishing diamond cutting business, which has persisted to this day. 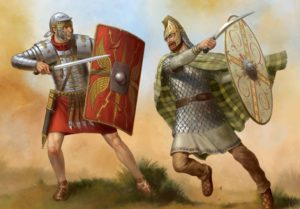 Hindu tradition links diamonds to Venus. Other ancient traditions associate diamonds with Mars. The association with Mars may be a result of the warrior traditions – they would wear diamonds before engaging in battle for strength and protection. It was

even believed that a diamond stone would make the warrior invincible – the ancient Greek expression for diamond actually translates to “invincible”. 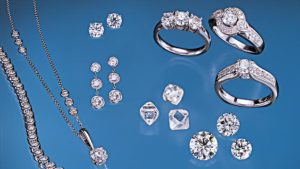 However gem quality diamonds are fashioned from the original crystal shape they possess a combination of brightness, sparkle, fire, and sense of purity not matched by other gems. – Jeff Scovil, Image courtesy of GIA.edu

Wearing diamonds is said to make the wearer happier in their relationships & bring success at work. Diamonds are said to be associated with benefits such as mental clarity, balance, and prosperity.  They are also known as a symbol of eternal love (hence diamond rings exchanged by couples during an engagement).

Please stay tuned for lots more diamond still to come in April:  Famous Diamonds, How Diamonds Are Graded & The Diamond Event on April 18 just to name a few.

A Rainbow of Fancy Colored Diamonds
Scroll to top