Egyptian archaeologists have discovered a tomb of a prominent goldsmith who lived more than 3,000 years ago near the Nile city of Luxor.  Found at the Draa Abul Nagaa necropolis, it consists of a small room at ground level and a burial chamber below containing four mummies, jewelry, sarcophagi, statuettes, pots and other artifacts.  The area is famed for its temples and burial grounds. 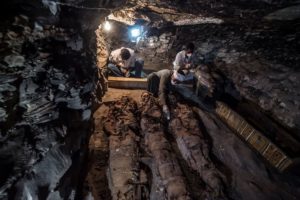 The tomb of “Amun’s Goldsmith, Amenemhat” contained a sculpture carved into a recess of him seated beside his wife.  A portrait of their son was painted between them.  While living, Amenemhat worked in the city of Luxor – 310 miles south of Cairo, just outside the Valley of the Kings – crafting golden finery for ruling elites including the royal family.

Egypt’s Minister of Antiquities, Khaled Al-Anani, said the tomb dated back to Egypt’s 18th dynasty New Kingdom era ― around 15th century B.C.  “The work did not finish yet and we’re continuing and working to find more objects and more tombs,” he said. 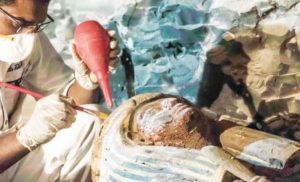 The team is teasing that they may have more exciting news to announce next month.  As for what that will be, nobody’s entirely sure, but according to former Egyptian minister of antiquities, Zahi Hawass, we’ve only scratched the top of the surface so far. 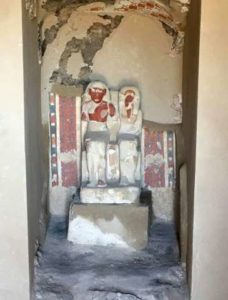 The tomb of a goldsmith dedicated to the ancient Egyptian god Amun unearthed by archaeologists in Luxor boasts a sculpture of him seated beside his wife.

Extinct Denisovans from Siberia Made Stunning Jewelry
Scroll to top