Our “Twenty Days of Diamonds” series would not be complete if we did not spend just a bit of time talking about some of the most famous diamonds in history.  Some you’ve certainly heard of, but others are not quite as well known.  Here, the top ten, and what they are known for.

1 and 2. The Cullinan and The Great Star of Africa

The Cullinan is the largest rough diamond of gem-quality ever found, weighing a whopping 3106.75 carats. It was cut into 105 diamonds, including the famous Cullinan I and the Cullinan II.

Known as The Cullinan I, The Great Star of Africa is part of the British Crown Jewels.  This second largest cut diamond in the world at 530.4 carats, is the topping piece for the Sceptre with the Cross, and is surpassed in size only by the Golden Jubilee Diamond, discovered in 1985.

The Hope Diamond boasts an unparalleled history. It is believed to have been mined in India, and then sold as a rough stone to Louis XIV, who had it cut from its original 112 carats to 67.50 carats.  He named it the Blue Diamond of the Crown of France. The diamond was stolen during the French Revolution, and only resurfaced after the statute of limitations for the theft expired. With its new name, the stone has changed hands several times, traveling from the UK to the USA. In the early 1900’s, rumors that owners of the Hope Diamond were faced with disaster began to circulate. One of those rumors, the legend of a curse from the Hindu goddess Sita, stuck. The ironically named Hope Diamond now resides at the Smithsonian Institute after its final private owner, Harry Winston, donated the stone in hopes that it would encourage the creation of a national gem collection in the United States.

Koh-i-Noor means “Mountain of Light” in Persian. Appropriately named, this brilliant 105.6 carat diamond dates back as far as the 13th century. The stone passed through many hands of the ruling class, including Shah Jehan, the Mughal emperor famous for the construction of the Taj Mahal.

After the death of its final Indian owner, the stone was presented to Queen Victoria as she assumed the position of Empress of India. It was worn in coronation ceremonies by three more British queens after being cut to its current size and set in the crown of the female consort to the Monarch of the United Kingdom. It is currently on display in the Tower of London, and ownership of the stone is being disputed by the Indian government.

Discovered in 1698, the rough form of the Regent weighed 410 carats. It was cut in England, and its perfection and brilliance gave it the reputation for being the most beautiful diamond in the world. It has adorned the crowns of kings as well as the hilt of Emperor Napoleon Bonaparte’s sword. The Regent is on display at the Louvre with the rest of the French Crown Jewels.

This famous diamond was found in India, and has a polished and cut size of 70.20 carats. The stone appeared at auction at Christie’s in London in 1865 and made its way into the hands of the Ottoman sultans. It’s history before that is uncertain. Eventually, the stone was sold to an American socialite and gem collector, May Bonfils Stanton. The stone is currently owned by a private collector.

The Orloff of India is an exceptionally pure and clear bluish-green diamond. It is estimated at 190 carats, but has never officially been weighed. The Orloff has quite a history behind its beauty. Believed to have been stolen from a Hindu god statue in the 1700’s, it was sold, traveled to Europe, and eventually purchased by Count Grigory Orlov as a gift for Catherine the Great of Russia. It is now on display at the Diamond Treasury in Moscow, set on the Imperial Sceptre commissioned specifically for the stone by Catherine and completed in 1784. 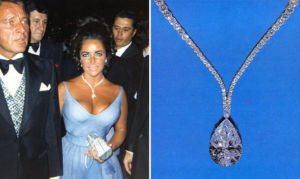 This is a relatively young diamond, unearthed by African miners in 1966. The stone passed through a few owners before Cartier purchased the diamond, selling it shortly after to actor Richard Burton. He presented the stone, mounted in a Cartier diamond necklace and weighing in as a 69.42 carat pear shaped diamond, to his then-fiancee Elizabeth Taylor. The famous actress cherished it, but sold it after she divorced Burton and used the $5 million dollars to build a hospital in Botswana.

This shield-shaped, 55.23 carat pale yellow diamond once belonged to a French Ambassador to Turkey.  He loaned it to Henry III, who had it set into a cap that hid his baldness! The Sancy eventually disappeared during the French Revolution. It resurfaced for short periods throughout history until being sold to the Louvre in 1978.

The 793 carat (rough weight) Great Mogul diamond is believed to have been part of the Taj Mahal built for Shah Jehan. Like other old sizable stones from India, it changed hands multiple times between 1650 and 1747. Some say it is only a fable, but some historians are willing to say that the Orloff was cut from The Great Mogul. While the Orloff may be questionable, like many large stolen gemstones, The Great Mogul was likely cut into many smaller diamonds to disguise it’s true origin.

A famous diamond marketing slogan says that “A Diamond Is Forever”.  Each of these ten stones has its own unique “forever” story.  If only diamonds could talk, the stories I’m sure these would tell!

Gemstones: Not Just For Jewelry

On Every Wish List This Year: Black Diamonds
Scroll to top