Many large and extraordinary diamonds have gained fame, both as exquisite examples of the beautiful nature of diamonds and because of the famous people who wore, bought, and sold them. The names of some have become proper nouns; others have histories of royal ownership; in some instances, they may or may not be cursed. 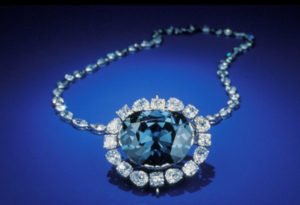 The Hope Diamond
The Hope Diamond is a Fancy Dark Grayish Blue Diamond, weighs 45.52 carats. The diamond was found in India (1642). Originally the diamond was 132.00 carats. It was set in the royal crown of Luis the 14th. It was stolen during The French revolution. In 1830 a blue diamond was bought by a diamond dealer named Henri Thomas Hope. There are people that believe that this diamond is part of the hope diamond. There is also a legend one might say that a curse was placed on the stone and brings bad luck to anyone that owns it.

The Koh-i-Noor Diamond
Koh-i-Noor means a mountain of light (Persian translation). It is a white diamond weighing 108.93 carats. The story behind this diamond goes back to the year 1302. According to the legend the name was given to the diamond by the Persian shah, that was stunned by its beauty. In 1849 the diamond was sent to queen Victoria where it was cut once more (original weight was 186 carats), then its weight decreased to 108.93 carats and was set in Queen Elizabeth’s crown. 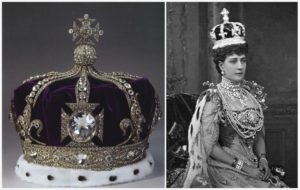 The Excelsior Diamond
The Excelsior Diamond is a gem-quality diamond and was the largest known diamond in the world from the time of its discovery in 1893 until 1905, when the larger Cullinan Diamond was found. It was a high clarity, blue-white stone, found by a South African mine worker who picked it out of a shovel full of gravel. The shape of the stone was out of the ordinary: flat on one side and rose to a peak on the other, somewhat like a loaf of rye bread. It is believed that this is what inspired the diamond to be named ‘Excelsior’, meaning higher. Due to its irregular shape, it was cut into 21 polished stones.

One might thing that a list of the most expensive and rare diamonds wouldn’t change that often, but in recent years, due to the constant increase in prices of natural colored diamonds, records are broken quite often. Naturally the “new” most expensive diamonds immediately become the most famous ones of the moment, along with the collections and jewelry that they are used to create.

The Aurora Butterfly of Peace, via GIA

Aurora Butterfly of Peace
An unmatched private collection made by Alan Bronstein compiled of 240 colored diamonds – almost as the number of diamond colors. The collection features all the colors of the rainbow and the total diamond weight is 167 carats. Creators Bronstein and Rodman dedicated the butterfly to “the dissemination of peace and harmony among all men, religions and races.” 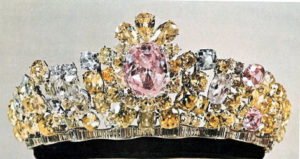 Noor-ul-Ain Diamond Tiara
The Noor-ul-Ain Diamond Tiara was given to Empress Farah Diba when she married Mohammad Reza Shah Pahlavi, the last shah of Iran. The centerpiece is a 60-carat pink diamond which on its own is a contender to the crown as one of the most important pink diamonds out there. In Persian and Arabic, Noor-ul-Ain means “light of the eye,” and the diamond certainly lives up to the name. Surrounding it with hundreds of colored diamonds and centuries of royal history make it irreplaceable.

Finally, diamonds are making headlines for their use in science and medicine now more than ever before.  Last year it was determined that diamonds may also be found in space, and that lab-grown diamonds might be valuable in medical diagnostic test for everything from Cancer to Heart Disease to Alzheimer’s Disease.

Diamonds in a Meteorite….
Scroll to top