The name “aquamarine” is derived from two Latin words: aqua, meaning “water,” and marina, meaning “of the sea.” Depending on which angle you look at an aquamarine, it may look blue, green, or colorless. This is called a pleachroic effect. This mirrors the effect of looking at water which can appear clear or shades of blue and green depending on your changing viewpoint and lighting. 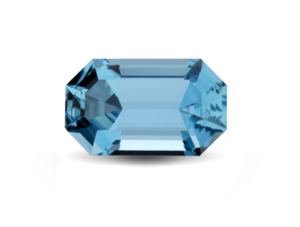 Mined at high elevations, aquamarine crystals can grow to 3 feet or greater. The largest aquamarine was discovered in Brazil in 1910. It weighed 243 pounds. The smaller stones it was cut into yielded over 200,000 carats.

“When blessed and worn, it joins in love, and does great things.” –Ancient Roman Legend

In Ancient Roman times many grooms gave aquamarine to their brides. In Medieval times, the stone was thought to reawaken the love of married couples. It was also believed to render soldiers invincible and keep sailors safe. It was a symbol of happiness and everlasting youth for the Sumerians, Egyptians, and Hebrews.

“The lovely aquamarine, which seems to have come from some mermaid’s treasure house, in the depths of a summer sea, has charms not to be denied.”–Pliny, Ancient Philosopher

According to folklore, aquamarine would bring victory in battles and legal disputes. Aquamarine was widely used throughout Europe in the Middle Ages as an antidote to poison. It has also been used as an oracle and cut into crystal balls to strengthen its fortune-telling power.

Aquamarine has also been used as a healing stone for afflictions both physical and psychological.* The gem has been credited with curing ailments of the teeth, jaws, throat, stomach, and liver. When worn as an amulet, it was believed to bring relief of pain, make the wearer friendlier, quicken the intellect, and cure laziness. In modern times, aquamarine crystals have been used for meditation and are believed to help quiet the mind.

*The information provided here is based on folklore. It is not meant as actual medical information.

Sources: GIA, Jewels for Me